“How Safe is That Safety Belt?” This question was the title of an article written by Clarence Rose, the creator of Rose Manufacturing Company, Englewood, Colorado. Published in 1956 in The National Safety News, the article expressed concern that fall protection equipment being sold was unsafe. After forty years of OSHA standards, it is still a valid concern today. Although, this is not entirely the fault of OSHA, it takes years for standards to be revised and rewritten, and many more years as the newly proposed standards wind their way through the court system to face various challenges. Lastly, and unfortunately, you cannot regulate common sense.

According to a National Institute for Occupational Safety and Health study published in 2000, 13% of fall fatalities involved individuals wearing fall protection equipment. They were either using the wrong equipment or they were not properly trained how to use it. Only among falls and fall protections systems may we find this unique statistic, correlating the cause of death in conjunction with the use of equipment specifically designed to prevent it. Hard hats, ear plugs, safety glasses, and most types of PPE can only be worn one way. This is not the case with fall protection equipment. Considering these facts, fall protection systems merit a closer study.

There have been many developments in fall protections systems but falls are still the leading cause of death in the construction industry.

The use of fall protection equipment in the United States began in the 1930s during the construction of the Golden Gate Bridge. The architect, Joseph Strauss, and his team enforced the use of safety belts, lanyards, and safety nets on the project. This was at a time when other large projects, such as the Empire State Building and the Hoover Dam, chose not to provide fall protection equipment for their construction workers. Mr. Strauss developed leading edge fall protection methods on the bridge. His use of safety nets protected many workers from a fatal fall into the Bay and proved to be a groundbreaking concept. A concept that, even today, many claim is “infeasible.” ![endif]--![endif]--

While the use of safety nets had, and has, been limited primarily to large bridge projects and high rise buildings, the use of other fall protection equipment continued to grow. Led by Rose Manufacturing Company in the west and Miller Equipment Company in the east, safety belts and lanyards became a frequently used item in the construction industry. The standard equipment was a belt with two side D rings and 10’ lanyards with a snap hook at one end and a “whipped end” on the other. The “whipped end” meant the end of the rope was tightly wrapped with twine to pre-vent fraying. The lanyard was wrapped around the anchor point and knotted leaving a usable length of about six feet. This explains how the traditional use of 6’ lanyards with snaps at each end eventually became the standard.

There would be no major innovations to fall protection systems again until the early 1950s, when Clarence Rose completed impact studies at Ohio State University and pioneered the development of shock absorbers. After conducting a series of tests using anesthetized dogs, it was determined that a 6’ free fall with a lanyard and a body belt had the potential to inflict severe injuries to the worker. After a series of initial failures, Clarence Rose produced the first successful shock absorbing lanyard in 1956 with the introduction of the Dyna Brake ™ Lanyard, still sold by MSA today. It would be another 40 years before OSHA standards required the use of shock absorbing lanyards in fall protection systems.

Clarence Rose was also instrumental in the attempt to convert workers from the use of body belts to full body harnesses. The benefits were obvious as the full body harness redistributed impact to parts of the body better able to withstand the force of the fall. Moreover, the feet would lead the fall, as opposed to the head. Rose Manufacturing Company, at that time a subsidiary of Marion Laboratories of Kansas City, Missouri, led the conversion campaign. The real effort began in the late 1970s with the creation of the Rose Royce. This was the name given to demo trailers that traveled the country to large job sites to demonstrate the benefits of shock absorbers, locking snap hooks, and the full body harness. OSHA did not stop the use of body belts as a means of fall protection in the construction industry until 1996.

The next dynamic improvement in fall protection did not come from Clarence Rose, or even from the United States. Though there is still debate on who was first, most attribute the development of the self-retracting lifeline (SRL) to a small Swedish company called SA-LA. They introduced the product to the United States in the late 1970s with very slow growth primarily concentrated in the oil industry. As the units became smaller and lighter in weight, their wider acceptance increased rapidly. The self-retracting lifeline offers tremendous benefits over the traditional 6’ shock absorbing lanyard still used primarily in the United States. They will dramatically reduce free fall distance and the fall arrest or shock absorbing distance, cumulatively reducing the total travel distance of the worker in the event of a fall.

Obviously, one of the greatest dangers facing the worker is the risk of striking an object during the fall or the fall arrest. Decreasing the distance of the fall mitigates this risk; and the next step for OSHA should be to mandate the use of these self-retracting lifelines for all users of fall protection equipment.

…in 2000, 13% of fall fatalities involved individuals wearing fall protection equipment.They were either using the wrong equipment or they were not properly trained how to use it.

Vertical systems are not the only methods of fall protection to receive recent attention. Another major development has been the increased use of horizontal life-lines or HLL. With the use of this system, a worker can attach to the line and move laterally without the need to continually relocate to the next anchor point. The challenge of HLL development was how to rein in the dynamic forces that were applied to the two anchor points of the lifeline during the event of a fall. It was possible, even equipped with a shock absorber, for a single individual to impart almost 30,000 pounds of force at each end of the cable. Until the development of shock absorbers for the anchor points, such as the Zorbit™, horizontal lifelines were difficult, if not impossible to utilize.

Published in The Compass 2012

Last Chance for Discounts for KC

Are you a Competent Person? 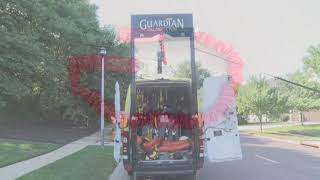 Join the Stand Down